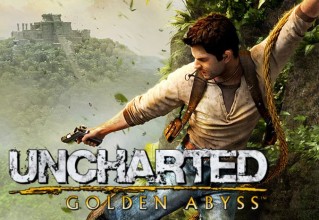 Climbing and Killing for Fun and Profit – Uncharted: Golden Abyss

Published by Ryan Cave In PS Vita No Comments

Nathan Drake is terrible at his job. He takes countless lives, destroys an inconceivable number of irreplaceable relics and unfailingly obliterates an ancient city on every one of his adventures. This may not look good on his resume… but it’s a hell of a ride.

Uncharted: Golden Abyss was (and is) the PSVita’s flagship game. It proves that the system has the power and controls to create games nearly, if not totally, on par with what the PS3 has to offer. While it never hits the series highs found in Uncharted 2 or the spectacle of Uncharted 3’s greatest moments it does find sure footing with the core gameplay established in previous games. Two specific elements define the Uncharted series: perilous climbing and frivolous killing.

Golden Abyss focuses heavily on those two features and because of this it manages to firmly establish itself as the second best game in the franchise. While it lacks the moments of awe found in the PS3 iterations, it plays out like a more polished take on the first entry and avoids any of the excruciating missteps found in the third. Unfortunately, and undoubtedly a result of it being a launch title, Golden Abyss features numerous sections that require the use of the touch screen and these consistently pulled me out of the narrative and never felt natural. When climbing your options are admittedly limited and it’s more a matter of following the only path rather than finding the best one, but somehow I still felt in control and the experience was ultimately fulfilling. The same cannot be said of any touch screen moments. Instructions consisting of nothing more than which way to swipe are displayed on the screen and you’re then required to echo what’s displayed. This form of instruction doesn’t make me feel like I’m in control. When I’m working my way through on onslaught of baddies I choose my route, where I take cover, which weapon I use and who I aim at. When I’m in a touch screen based fight I swipe left when I’m told to, right when I’m told to, diagonally when I’m told to and so on until I’m declared the victor. The result is a scripted feel that makes me feel like a spectator rather than a player.

Mercifully, they’re aren’t a ton of these moments and only a couple major ones. There’s a few other types of touch screen requirements that are mildly irritating, but don’t detract to much from the experience (making me paddle a canoe is akin to making chose which foot to use while walking. This is a game, if I want to go forward I should just be able to press forward).  Firefights play out like other Uncharted games and are a blast as always. Controls are tight and I rarely had trouble sticking to cover or aiming my weapon. There’s a decent assortment of weapons and trophies are provided at regular intervals encouraging the use of a diverse assortment rather than just sticking with what works. I found the game to be relatively generous with aiming while I was sniping and I suppose that’s to compensate for the likelihood that you may be playing this game while in a moving vehicle or some other location that reduces stability.

What was noticeably absent was those epic moments that are traditionally synonymous with Uncharted games. There’s not a lot of diversity in the locations and there’s never any grand challenges. Sure I had to outrun the occasional explosion, but I never found myself in a situation as amazing as jumping from car to car in a convoy or trying to climb back aboard a train as it dangled over a cliff. Nor did I find myself anywhere I didn’t expect to be. Golden Abyss takes place primarily in rain forests and underground caverns. Fitting locals for an archaeologist to explore, but not the breath taking locals I expect from an Uncharted game. I want to fall out the back of a plane, scale the side of a luxury liner and stomp through sand, dirt and snow.

Despite these shortcomings Uncharted: Golden Abyss kept me eager to keep going. Drake’s love interest was genuine and compelling and while the villain was a cookie cutter dictator I was still engrossed enough in the adventure to constantly crave more. Golden Abyss turned out to be a thrilling adventure I could fit in my pocket (more or less, Vita is a sizable piece of hardware) and it was all I could do to put it down.

Uncharted: Golden Abyss launched with the Vita and proved the system was a worthy purchase loaded with potential. Now, over two years later, it remains a top notch game and an essential purchase, but I’m left wondering where the follow up is. Uncharted works brilliantly on this system and if they trim the touch screen stuff (I didn’t get into the agony of the rear touch, but I’ll just say it’s barely used and doesn’t work) and add in a few epic moments the sequel could easily rival anything put out on PS3. The Vita is isn’t dead, but it desperately more games like this. Bring on the next adventure.