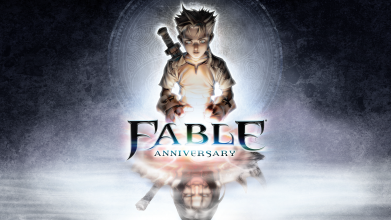 Published by Ryan Cave In Xbox 360 No Comments

Do people go on quests in real life? It sounds very appealing. Off on an adventure with the world as your playground and some noble goal just over the horizon. Unfortunately, I’ve never been able to work out the logistics of such an endeavor. Where would I stay? What would I eat? What would become of my home and all my precious things? Plus I don’t know of any quests. Fortunately, there’s Fable where quests find their way to the Hero’s Guild and all the Heroes that reside there are free to pick and choose what quests they’d like to attempt be they noble or evil. Also, and somewhat fortuitously for me, none of the other Heroes seem to take any of the quests so I’m free to tackle them all. Given my virtuous nature I of course only select those quests that are there to better the world (with the added benefit of making me more beloved by my fellow man and putting a little gold in my pocket).

I’ve been eagerly anticipating the release of Fable: Anniversary since it was first announced. I was heartbroken (or at least mildly miffed) when it was delayed last year as I traditionally find myself drawn to the land of Albion around November or December (last year I replayed Fable 2). Nevertheless, February has come and gone and Fable: Anniversary has long been available.

I returned to Albion with a certain degree of trepidation. I was excited to return to my beloved franchise, but I hadn’t played through Fable since it’s initial release 10 years ago.

Fable is loaded with simple ethical choices and with rare exception I always go with the good option. I’m often tempted by the evil choices, mostly out of sheer curiosity (or impatience as it’s a lot faster to swipe a few goods then it is to save up for them), but I need to pick good as that’s my instinct and choosing the dark path tends to take me out of the game. If I’m to get truly lost in a game I need to accept the reality of it and if I’m going to call myself a Hero then running around stealing and killing doesn’t really fit with that moniker.

Once I’ve committed to my chosen noble lifestyle I’m free to run around Albion helping the needy and, oddly enough, killing countless people. All bad people of course (with the exception of that poor fellow who strolled in front of me just as I fired an arrow), but a lot of them. To become a true hero one must gain experience, not just from the numerous quests one must undertake, but also from slaying countless bandits, bugs and balverines (basically werewolves). In the land of Albion experience, not blood, spills all over the ground when a baddie meets his demise. Thus the only way I can become the hulking, skilled and magical hero I need to become is to annihilate anyone and everyone who has chosen a less then respectable life. Fortunately, here in Albion there’s no middle ground. Some people are good and some people are bad. Good people live in towns or wander the land selling items while praising my many great deeds. Bad people dress like bad people and try to kill anyone who gets near them. I deliver justice with my sword. Or my bow. Or one of a plethora of fantastical spells I’ve mastered (using the experience I acquired when I destroyed other villains).

Albion, at least in this incarnation, is not the biggest place. It primarily consists of a few towns connected by narrow paths. However, as I explore and take on greater challenges the scope of Albion does grow a fair bit. I’m able to teleport to a few islands and even the frozen land known as the Northern Wastes.

On occasion I was taken out of the narrative not by my choices, but by the game locking up and forcing me to manually restart my Xbox 360. This was always very jarring and is, quite simply, inexcusable. I can’t remember the last time I encountered a game that froze up consistently. I had to play in fear, never knowing when my journey would suddenly come to a halt and I’d be forced to redo some of what I had already accomplished. Fable saves frequently so this was never more than a minor problem, but still one that absolutely should not be there. Prior to an update the game would lock up on every other time I played it, but since the  update it’s only frozen twice. A considerable improvement, but a game that’s hit retail should be completely stable and never freeze at all.

The visuals of Fable have never been better, but they fall short of it’s sequels, that last of which is now nearly four years old. Nevertheless it looks good and still has that Fable style that is so essential to the experience. Fable has a reputation for it’s “Pythonesque” style of humor and while it never hits the highs of Monty Python there is no shortage of laughs to be had.

The lands and characters are charming and I always had a hard time breaking away. When I’m in Albion I’m content running back and forth across the land seeing the sights and growing ever stronger. It’s not often I get 100% in a game along with every achievement, but I did with Fable. The Achievements are well implemented and pursuing them mostly enhances the experience rather than forcing the player to pursue impossible goals or perform tedious fetch quests. I grew a bit weary of trying to find books, but every time I presented one to the school teacher I was rewarded with a humorous aside while he read the (often inappropriate) stories to his class.

It’s fun to interact with the residents of each town and ever so easy to make women swoon, but much to my dismay all the women are basically the same. They say the same things and react to my shenanigans in the same ways. All except one: the evil mayor Lady Grey. She stands out because she has a unique personality and some well placed polygons. The problem is that she’s pure evil. Nevertheless I wooed and married her because there’s quests to be had and parts of the story won’t be revealed if she gets the treatment she deserves. Plus she disappears later for no apparent reason. It would have been nice to see a few other strong characters to court. They do exist, but there’s no way to get their attention… which is too much like real life for my taste.

When I finish a game like Fable I get a feeling of accomplishment. While that doesn’t directly translate into any kind of real world success the feeling does influence me. I suddenly feel better about myself and that desire to succeed grows and inspires me to do more, not just finish more games (though it certainly does), but also pursue other goals… such as write a blog.  Fable is one of my favorite franchises. While Fable: Anniversary isn’t my favorite game in the series it’s still a wonderful game and a classic worth revisiting.