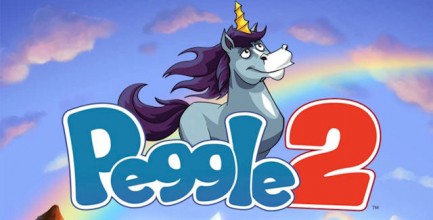 Throw the Ball and Watch the Magic – Peggle 2

Peggle 2 is Peggle. Fortunately I love Peggle so it works out well. I was hesitant to get Peggle 2 despite my love of the first one because it’s $12.99 price tag is ridiculous considering games of this nature are typically a dollar on iOS. Much to my delight it was recently on sale for the still somewhat high, but far more digestible, price of 6 bucks.  Since I just got my Xbox One replacement (a story for another time) I was eager to get some new content on it.  Upon purchasing the game I immediately had buyers remorse. After all I’ve got both of June’s free games sitting on my hard drive already. However, I couldn’t resist the sale and it was only a couple levels before Peggle’s addictive charm won me over.  Over the past week it’s been my go to game and I’ve played little else.

The first thing I noticed when I started playing was how much dead space there is on the stick. It needs to be pushed about a quarter of the way over before the game responds. I thought this might be an unfortunate quirk of the Xbox One controller, but when navigating the menus the response is instant.  This is a frustrating problem and while I did eventually become accustomed to it there were often times I was trying to set up a tricky shot and it was a nuisance.  This issue aside the gameplay is the same as the first, but there are new “Masters” for each world. There are only five this time around with an extra available as DLC, but I have yet to part with the two dollars required for that sixth character. Each Master has their own unique power up that activates when a green peg is hit. These powers tend to be incredibly powerful and to achieve a high score or often even beat a stage one must trigger these powers strategically.

Peggle looks like a simple game and in essence it is. Just fire a ball in to a group of pegs and take out all the orange ones to win. However, each level is loaded with blue pegs to get in the way and their placement become increasingly fiendish as the game progresses. Of course these blue pegs are worth points as well and to truly beat a level one wants to eliminate all pegs regardless of color (a feat I accomplished only a few times… so far). Each level is custom tailored to require clever use of it’s Master’s power. The first world acts a training ground (just as it did in the first) as Bjorn the unicorn’s special ability is simply to show where the ball will go after its first bounce. This a great way to learn the basic mechanics of the game. Later worlds involve dropping giant bowling balls, knocking pegs around like rocks in a curling match and even causing the blue pegs to have no substance (which seems like it should make things easier, but actually allows no room for error).

After beating the levels of a world a corresponding Trials section is unlocked. These trials often require one to use a Master’s power in specific ways. Many of them are very simple and serve to illustrate how a power works or teach some of the nuances of the game such as exactly where the ball will go when bounced off pegs from various angles. It seems odd to have these levels become available after a world is finished as many of them work best as training areas that help with the main game.

Peggle is a charming game. I suppose it has to be as most of the time is spent watching the results of a shot rather than setting it up. The game is colorful and bright and exudes of a sense of childish joy. Each world’s Master has a vivid personality and unique look. They stand at the side of the screen as a shot is lined up and react based on the results. The animations are minimal, but effective. When a level is beaten their jaws drop. Every time I see this I get a little smile, particularly when it’s the yeti as he seems truly shocked and delighted.

Another aspect of Peggle 2’s enduring charm is the music. Just as they have their own powers each Master has their own music. Each track suits it’s respective character perfectly and creates a mood very different from every other track. Most are very upbeat, but the last Master (which is a cute, but somewhat disturbing ghost of a little girl) has a cool, eerie melody I really enjoyed. The sound of the pegs being hit varies depending on which Master is present as well which is a nice touch.

Peggle 2 also contains a respectable multiplayer option which allows two players to play competitively while alternating turns on the same board.  I spent a fair amount of time with the multiplayer in the original and was pleased to see the sequel offered it as well. There’s an impressive number of options when playing as one can alter the number of orange and green pegs, turns, etc. However, unlike the first game it doesn’t track the number of wins which is essential when having a tournament with a buddy and a strange thing to omit.

Not surprisingly, Peggle 2 is as fun and addictive it’s predecessor. I suppose one could fault it for being too similar to the original, but I’m hesitant to call that a flaw as I didn’t expect or really even want it to be a particularly different experience. The new Masters do a great job of changing up the gameplay and the difficulty ramps up nicely without ever becoming overwhelming or feeling unfair.  It’s often feels like a game of trial and error, but as one learns the intricacies of the game the errors become more a matter of timing than guessing (as levels progress pegs and obstacles start moving around). It’s a great game to play for a few minutes at a time, but it’s highly addictive nature make it hard to stop and keep me coming back. I still have some achievements to unlock and I aim to get them all. I even expect it’s just a matter of time before I crack and buy that last Master.