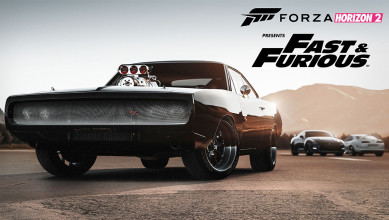 I got excited when a new Fast & Furious movie was  announced. I got excited when a new Forza Horizon was announced. I got very excited when a game combining both of these wild franchises was announced. Not only were two great franchises coming together, but the game would be free (for a limited time). This combination sounds perfect; Horizon is an exceptional, over the top racing game bursting with personality and Furious is a tremendously entertaining action franchise loaded with a charismatic characters driving fast cars and doing crazy stunts.  Much to my dismay Forza Horizon presents Fast & Furious possesses none of these qualities.

Before I go on it’s important to note that Furious Horizon (as I call it) is still a fun game. The gameplay is tight with a healthy dose of arcade racing physics (for example head on collisions are a mere nuisance rather than horrific and fatal merging of metal). The game doesn’t take long to finish, but that’s fair as it’s also free. Or at least it was until April 10, now it’s (an arguably excessive) ten bucks.

In the Furious Horizon campaign the Horizon tournament is still going on, but it’s presence is minimal here, whereas in the full game it is ever-present and despite its impossible nature it feels real and exciting. The premise here is that the driver from the Horizon games has been drafted by the crew from Furious to round up a few cars. Since, for some reason, they can’t just steal them they need someone to win the cars by racing for slips. A reasonable premise, but perhaps that’s where things start to go wrong… no Furious movie has ever had a reasonable premise.  Ludacris is our guide and he is the only Furious cast member to make an appearance. Appearance is probably a strong word as he doesn’t appear, we only hear his voice. For a franchise with such an entertaining cast it’s disappointing no one else is along for the ride. I suppose that would have cost considerably more and given this is a free game it’s understandable.

It’s clear that this is intended more as a promo for both franchises rather than a property meant to stand on its own. This makes it a missed opportunity. Furious is a huge franchise and Forza is no slouch. These are both franchises with a lot of money behind them and it always shows on screen.  This game unfortunately feels cheap. The gorgeous visuals of Forza remain intact, but it all just feels lifeless. Alone neither franchise ever feels that way. I’d be happy to spend some dollars on a fleshed out game built on these properties. But that game would need to make good on its premise. Furious movies are insane. This game is incredibly tame by Furious standards. Merely racing on a busy street just doesn’t meet Furious’ criteria. Honestly, even racing against a helicopter or on the runway while a plane is landing doesn’t either. Sorry for the spoiler, but it’s obvious this game is going to end at the airport from the moment it begins. When Furious ends at an airport cars and planes explode, people die and… well, more stuff explodes. I want to drive down the runway while the world around me explodes. I want to drive onto a moving plane. I want to drive out of a moving plane. I want to participate in the getaway after a heist. I want to drive recklessly down a highway while a tank driven by a madman tries to blow me up. I want the fast paced over-the-top insanity that I always get in a Furious movie.

A few years ago a game called Split/Second came out and it was all about driving around exploding buildings and even featured a course that required driving under a landing plane. Sadly, that tragically underrated game went largely unnoticed and sold poorly. Having played that game I know that a more apropos game can be made to merge these two franchises. Forza Horizon 2 is a fantastic game and I’ve never seen a Fast & Furious movie that wasn’t a riot. Forza Horizon presents Fast & Furious is a fun game, but the potential for this combination is huge. Given the ongoing success of both franchises I sincerely hope that there’s another game in the works. A full retail game could be phenomenal as long as it fully embraces the tremendous strengths of both franchises.