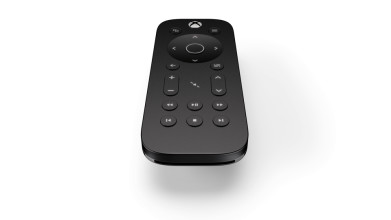 Sometimes I don’t feel like yelling at my Xbox One. Sometimes I just want to pause a movie the old fashioned way. At launch there were two ways to control the Xbox One: with your voice or with the controller. Both have their place, but neither is always ideal when it comes to some of the multimedia functions available on Xbox One. When it works voice control is awesome and makes me feel like I’m on Star Trek. It’s intuitive, easy and the fastest way to open an app. Sadly, on occasion it just doesn’t work (usually a result of background noise). Since I primarily use it for turning the Xbox One on or opening apps this isn’t much of a problem as I just yell again. More importantly, when I’m using YouTube or Netflix voice control just isn’t practical. Saying “Xbox play” or “Xbox pause” is fine, but navigating menus, while possible, can be more tiresome than time saving and fast forward or rewinding is awkward. For these scenarios it’s possible to use a controller, but without the dedicated buttons it’s tricky and just kinda feels wrong. Plus after a while without being used the controller shuts off, which makes perfect sense, but is slightly annoying as it then has to be powered up again by holding down the home button.  So despite a couple viable options, there’s nothing that can quite live up to the tried and true method of controlling a video: the remote.

Once Microsoft wisely accepted that some people just don’t want Kinect (I actually really like having it, but it’s definitely not essential) they realized that something a bit less cumbersome than the standard controller would be necessary for some of the Xbox One’s multimedia functions. Thus the aptly named Xbox One Media Remote was created.

This is a sleek little remote. It’s compact, has a matted rubber look and feel I love and, most importantly, all the buttons light up when the remote moves so it’s always easy to identify them in the dark. It has all the buttons one would expect such as play, pause and rewind as well volume and channel controls. It’s made watching videos far more enjoyable and I have no regrets in purchasing it, but now that I’ve had it the better part of a year with it I do have some qualms. Well, just one really. While it looks great and is clearly intended to be intuitive it lacks four vital buttons: A, B, X and Y. I suppose the logic in omitting these buttons was that they are primarily intended for gaming and the presence of buttons like pause, back, and menu would eliminate the need for them. Perhaps that could be true if all developers took that into consideration, but my most used video apps, YouTube and Netflix, both expect easy access to these buttons. Sadly, my beautiful little remote has no dedicated button for “search.” On Netflix one can either scroll up and up until the search window opens or, if you’re on the main menu, press back. While that’s far from being a big deal it is annoying and unnecessary. I was hoping that in the months following the media remote’s release these apps would be updated to better accommodate this shortcoming. On Netflix the view button (the one with the overlapping rectangles… I had to look it up to remember the its name) serves no function at all and the menu button just gives the option to unpin Netflix (hardly something I need quick access to). Either of these buttons could easily be used for opening the search bar. Fortunately on YouTube the menu button opens, fittingly, a menu which contains a search option. This, I believe, is a relatively new and welcome addition. However, there does not appear to be any way to open the the “guide” from the remote (on the standard controller it’s “X”). Hopefully Netflix, YouTube and Xbox One’s constantly growing number of other media apps will take the media remote into consideration in future updates and ensure it works well for controlling them.

While it’s unfortunate that the Xbox One Media Remote lacks the standard face buttons found on the standard controller it’s overall ease of use, fair price and sleek design absolutely make it a must have for Xbox One owners.