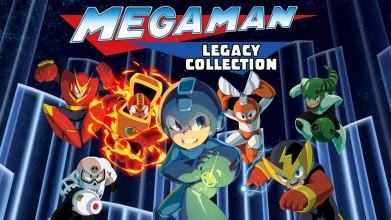 I’ve loved Mega Man for as long as I can remember. The insane challenge of the series has always appealed to me. I have an ancient memory of a childhood party where we all took turns desperately trying to survive Mega Man 2. I think that was the moment that the franchise forever took hold and guaranteed I’d be a fan forever. Now the Blue Bomber has been around for nearly 30 years and has seen multiple incarnations, including my personal favorite variation Mega Man X. But he didn’t become X until years after the initial release and numerous sequels. While I’ve been a fan most of my life and played hours and hours of his games I must confess: I have never beaten a Mega Man game. Or at least I hadn’t until the release of the Mega Man Legacy Collection.

Yes, after a lifetime of playing these games I finally finished one. Were it not for the Legacy Collection I doubt I ever would have accomplished such a feat. One could argue that the technique used borders on cheating, but I would say it’s more just a time saving device. The Legacy Collection allows you to save at any point and load from that exact moment. This means that you can save just before taking on a challenging boss (which is almost all of them) then reload upon inevitable failure. This saves time because you don’t have to replay a large section that you’ve already mastered. If I had to keep replaying the levels after losing to a boss I don’t think I would have been willing to put the time in needed to finish the game. Now I can fulfill my lifelong quest to beat all the games, without having to quit my job.

Beyond that welcome tweak to the game Legacy Collection also looks superb. It looks exactly like I remember, which means it actually looks much better. One problem with retro gaming is how the visuals never match my memory. Even playing games that came out within the last decade can be jarring (particularly 3D games). NES games never looked pretty and playing them on modern TVs exaggerates every unsightly pixel. Legacy Collection has a number of options to adjust the visuals and the default one does an excellent job of smoothing out the graphics without altering the aesthetic or affecting the gameplay.

It’s crucial that no changes be made to the core gameplay because precision timing and pixel perfect jumps are the core of the Mega Man experience. It’s impossible to play Mega Man for thirty minutes and not get frustrated, but with perseverance that frustration will be rewarded with deep satisfaction. I started my morning by beating Mega Man 1 and that good feeling lingered for the rest of the day (which was nice as I got a lot of work done).

The bosses in Mega Man games are always vibrant and unique. With each entry in the series their designs and inspirations grow increasingly outrageous. It starts simple enough, with each one having a special power based around logical elements such as air or water, but as the games used up these simpler concepts the boss’s powers grew stranger with Mega Man 6 including Knight Man and Centaur Man. The joy of gaining a boss’s power after his defeat and then trying to determine which boss will be weak to that power never fades. I am trying to keep my Mega Man experience authentic by avoiding using the internet to learn what power to use on each boss and instead relying on my intuition and luck to get me through. There comes an immense sense of relief when I get to a boss and find I’ve chosen the right weapon to efficiently dispatch him. There is also an immense sense of horror when I realize of chosen poorly and am grossly out gunned and doomed to explode.

A welcome bonus is a selection of challenge modes that are compilations of parts of the six games contained in the collection. Want to feel like punching a hole in the wall? Then take on the vanishing block challenge and play every excruciating moment found across the series! The vanishing blocks are actually a great example of when the save function proves its worth. There may be a large portion of the level before the section with the blocks, but the level only has checkpoints at the beginning and after the blocks, so if you plummet to your death (and you will) you’ll have to play through the relatively easy part to take another stab at surviving the damn blocks. This adds a tedious obstacle to the challenge. Reloaded from a homemade checkpoint allows you to focus on completing the problem section, just as one playing the piano would focus on a particularly difficult section of a piece rather than always playing the song from the beginning.

Then there is the music. One cannot speak of Mega Man without mentioning the classic tunes that have helped define the franchise. On many occasions I find myself with these tracks stuck in my head even though it’s been years since I’ve played the games they are from. The music in Mega Man stands on its own while defining the ambiance of each level. These tracks have been covered and remixed countless times and some have found their way into my music collection (mostly thanks to the work of contributors at ocremix.org).

While playing Mega Man is always a brutal challenge it is also in some way comforting. It’s style of gameplay holds up today and still influences new games. The recent trend of retro style games owes a lot to my little blue friend. There’s no shortage of incredible games that have recently released that are largely inspired by the design of Mega Man, but I’m thrilled that Capcom has found a way to refresh the franchise while preserving what made it great. I hope that a new generation of gamers sees fit to play these games and I’m grateful that I have the chance to revisit them, particularly now that I have the skill (and patience) to finish them. I’m on a mission to beat them all and if it proves interesting this won’t be the only time I write about the Mega Man Legacy Collection.