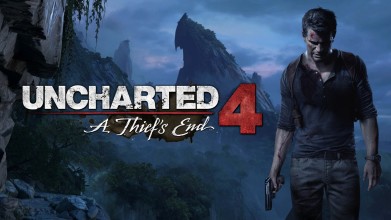 Searching for Treasure and Exploring Motivations – Uncharted 4: A Thief’s End

Published by Ryan Cave In Playstation 4 No Comments

Uncharted 4 is a pure Uncharted game. At its best it’s a phenomenal ride and at its worst it’s slow, but intriguing.  It puts story first and a gaming second.  As a result, it doesn’t always balance gameplay with storytelling as well as I’d like, but even during its slower more intimate moments it firmly held my attention.

Uncharted 4 reunites charismatic adventurer and unapologetic thief Nathan Drake with his long lost brother. Family is at the core of the story and loyalty becomes Drake’s driving force in his quest for treasure. Nathan Drake has been out of the game for years and the arrival of his brother, who was long presumed dead, triggers the adventure. His brother, who he has always felt he abandoned is in deep with some very bad people, so he needs Nathan to go on one last quest for treasure.  This obligation conflicts with Nathan’s newfound focus on having a “normal” life and keeping himself and, more importantly, his wife out of danger.

Uncharted breaks free of the adventurer cliché of the hero having a new love interest in each installment. Nathan Drake fell in love in the first game and stays with her through the entire series. Their love is put through its greatest test as Nathan lies about his whereabouts and his goals. Naturally his wife sees through him instantly and must decide if this violation of trust can be forgiven and if their marriage is salvageable.

As Nathan and his brother Sam pursue a legendary pirate’s treasure they are at odds with a former ally who is determined to beat them to it at any cost. Unlike the Drakes he’s not interested in financial gain as he’s already rich beyond measure. He’s out for personal glory and has an army for hire at his command. The Drake brothers have only each other… and of course Nathan’s longtime partner and mentor Sully.

The story moves swiftly from one epic set piece to the next while showing off gorgeous locations. Every location is richly detailed and a wonder to see. Sometimes I started to feel a little left out as my ability to interact with a lot of these places was limited and I didn’t always feel that I was in control. Occasionally these locations serve as a place to explore Nathan’s history which involves wandering through a house, looking at a few objects, and wandering a bit more. The pace during these sequences was very slow and came dangerously close to becoming dull, but the stakes were high and learning the history of the Drake family was enough to hold my attention. Plus, every house is so richly detailed it’s impossible not to have a lingering sense of awe when passing through them.

Nathan is almost never alone on this adventure. Other characters such as Sam and Sully are usually nearby and behave in a genuinely believable manner. As the trio cruise around a lush mountainside they banter and react to the environment and my questionable driving skills. If I step out of the jeep while Sully’s in the middle of a story he’ll stop talking and when I hop back in he’ll take a moment to remember where he was in his story and get back to it. The feeling of camaraderie is always present when Nathan is with his friends and the affection he and his wife share for each other is never in doubt.

As Nate and Sam search for clues they traverse diverse landscapes and must overcome diverse obstacles, some seemingly insurmountable while others seem like they shouldn’t be obstacles at all. Any time there’s a great chasm there is always some branch or board ready to support Nate’s trusty rope. He will fearlessly swing across a ravine and grab on to the opposite cliff face.  However, whenever Nate is faced with a small wall he is at a loss. Usually his brother will find a way to scramble up (usually with a boost from Nate) and find a conveniently placed crate which he will push down for Nate to climb. In my travels with the Drake brothers I learned that the world is flush with crates. Wherever a small wall blocks the way forward a crate is never far away. Always a crate, never any other crate sized object.

It started to feel odd that these problems were handled the same way every time, while other massive obstacles are tackled with far more creativity. Pulling levers, climbing massive gears and throwing out his grappling hook when the ground gives way is second nature, but tiny walls are just too much to face. In truth this quirk didn’t bother me until Nate’s inability to use his rope to tackle simple circumstances became a plot point. It was frustrating that he would simply give up instead of just dropping down his rope.

As Nate slowly moves closer to finding the ultimate treasure he has some marvelous moments. Early on he sits in his attic and gets lost in nostalgia. The following sequence was low key while being simultaneously melancholy and joyous. It is now one of my favorite moments in this or any Uncharted game. As Nate wanders through a marketplace he takes in the sights and interacts with some of the people he encounters. Moments like this invoke a feeling of magic and wonder while reinforcing the illusion that all of this is real.

Later the adventures rent a jeep and quibble about what they paid. Roaring around the landscape was liberating and exciting. Nate puts his rental cars through hell as he drives on narrow paths along clifftops and fights his way up muddy inclines. The experience moves from relaxing to exhilarating almost instantaneously and I loved cruising with my fellow adventurers in that trusty jeep.

As is custom in nearly all adventure games there is no shortage of trinkets strewn about the world waiting to be collected. Each little treasure appears as a flashing sparkle on the landscape and when found can be examined in detail. This method of displaying these items is frustrating as each sparkle is clearly nothing more than a point of light. The object that is discovered is never really there. Given that each one is fully rendered and can be closely scrutinized once added to inventory it seems odd that these treasures weren’t placed in the environment. Seeing a sparkle atop a tiny jade monkey tucked away in some dusty corner would be far more satisfying than walking up to a floating point of light and discovering that it represents a treasure that just hasn’t been rendered.

There are awe inspiring areas that almost feel wasted. Not because there’s anything wrong with the locations, but simply because they are used for mundane purposes. Nate’s underwater abilities are well fleshed out, but he never does much below the surface. While scuba diving he explores a wreck and collects a few boxes that have come loose. The area is impressive and the recovery of the enormous storage crate is a remarkable sight, but this is used to show what Nate’s post adventurer life has become and is deliberately uneventful.

I was hooked on Uncharted 4 from the moment it began. It tells a beautiful story about family, trust, priorities and personal growth. Its occasional focus on story telling over gameplay sometimes made me feel left out and early on I thought “this Uncharted movie would make a great game.” Fortunately, as the story unfolds the game expands and there’s no shortage of epic moments of climbing, shooting and discovery. The villain is a tad familiar, but Nate’s personal relationships are deep and emotional. He is torn between his obligations to his brother and his wife and this struggle weighs heavily on him throughout the game. It can be hard to accept him as the good guy while he slaughters countless goons for hire, but that’s the suspension of disbelief required for any game of this nature. While Uncharted 4 isn’t the mind blowing surprise that Uncharted 2 was, it is a superb entry in the series and, if it truly is the final chapter, it is an wondrous and greatly satisfying final outing for Nathan Drake.