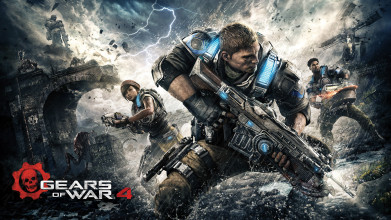 Within seconds Gears of War 4 establishes itself as a true Gears game. While many games force the player to watch a lengthy introduction before being able to jump into the gameplay, Gears 4 blends the introduction with short playable flashbacks. These scenes look gorgeous and serve to reintroduce the world of Gears. We join Cogs in enormous hopeless battles. We see how the war with the Locust began and participate in a few notable events concluding with its final battle, which comes to an abrupt halt thanks to the events of Gears of War 3.

When I first learned Gears 4 took place 25 years after the events of Gears 3 I was concerned. Perhaps it was just fear of change. I felt the Gears I love was being left behind. It’s been ten years since the launch of the original, so we’re jumping an extra fifteen years ahead. However, the decision makes sense as it helps set up the events of the game and creates the opportunity for new characters to join the fight without completely abandoning the old ones. Marcus Fenix is present for a significant portion of the game, but he lets his son JD take the lead. Surprisingly, this feels natural and creates a solid dynamic between the two. JD shares Marcus’ leadership qualities, but is a much lighter character while Marcus’ gruff demeanour works for his new role as a secondary character, shouting disapproval while guiding JD forward.

The first Gears of War brought a new form of gameplay. It was fantastic and unconventional. It was my first time with stop and pop gameplay and I couldn’t get enough. Gears of War 4 preserves that gameplay while refining it and I still can’t get enough. The control is tight and a few welcome tweaks make it a joy to play. Finally, I can run toward an obstacle and slide over it without losing momentum. It’s also possible to grab an enemy hiding on the other side of a barrier, pull him over and finish him. No more trading gun shots at awkward angles.

The only misfire for me is the return of the wave portions found in Gears of War: Judgement. These sequences take me out of the narrative as they constantly remind me I’m playing a game. There’s no explanation for how the characters know exactly how much time they have before the next wave. The giant ticking clock in the HUD is a constant reminder that this is all just an orchestrated farce. Setting up weapons before the attack comes brings the action to a complete stop and is a tedious chore. The game comes back to life once the wave arrives, but the artificial nature of these portions is always a distraction and prevents them from being on par with the rest of the game. Fortunately, there are only a few of these sequences.

The Gears franchise has never had the clearest storyline. Gears of War 4 does an admirable job of tying the events of the previous games together and digging deeper into the world the game take place in. It explores the aftermath of the war fought during the original trilogy and gives a better idea of how society functions in this world.

The enemies are different from previous entries, but function in similar ways. There are the primary soldiers which are literally upgraded versions of the old “Locusts” as well as juvenile ones which scurry around and replace the wretches from previous games. New, larger enemies also appear and do a respectable job of breaking up the gameplay. Creatures such as the snatchers require a bit more movement to effectively take on, as they will approach and eat you if you try to stick with traditional stop and pop tactics.

A few new weapons compliment the return of the best classic ones. These weapons are largely fun to use. Popping up with new Embar sniper rifle for quick no scope shots or using the Buzzkill to launch saw blades across the battlefield to slice enemies in half never gets old. However, nothing can quite top the perfection of the classic lancer which remains the most satisfying gun and best way to saw an enemy in half.

Gears of War 4 is more than a worthy entry in the series, it is one of the best. It’ll take several replays before I can decide where I’d officially place it on my list, but that’s not a problem as I’m certain I will play it countless more times. Creating a campaign worthy of playing multiple times proves this is a true Gears game. It’s exactly what it should be. It introduces new heroes, new threats, expands the narrative and above all has sublime gameplay. This was an exhilarating experience which reinvigorates the franchise. My love for Gears has been renewed and it won’t be long before I up the difficulty and play through Gears of War 4 again.

Tags: Gears of War 4, Xbox One
About the Author