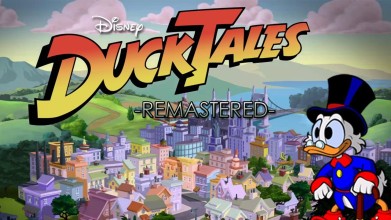 Published by Ryan Cave In Retro No Comments

When I was a kid one of my favourite shows was DuckTales. After school everyday I would excitedly rush home so I could catch as much of The Disney Afternoon as I could. That programming block contained some of my all time most beloved cartoons such as Rescue Rangers, Tale Spin, Darkwing Duck and the cream of the crop: DuckTales. There was something magical about that show. The inhabitants of Duckberg seemed so real, despite being anthropomorphised ducks. These were adventurous characters who faced moral challenges, ventured to wondrous places and lived life to the fullest. The star of these tales was Scrooge McDuck, a penny pinching sourpuss who would go to almost any length to turn a profit (or find a treasure). Scrooge’s softer side was exposed via his interactions with his three nephews and an adorable little girl who’s relation I’ve completely forgotten. In 1989 we were given a chance to walk a mile in Scrooge’s spats (he didn‘t wear shoes) courtesy of the NES.
The DuckTales game has become a point of burning nostalgia in my memory. I didn’t own it as a kid, but I had a chance to play it somewhere (presumably I rented it as that was the thing to do at the time) and that copy of Nintendo Power with Scrooge on the cover was one of my favourites (not my absolute favourite, but I’ll ramble about that issue another time). Years ago I managed to pick up a copy a pawn shop and I’ve played it regularly (meaning every few years) ever since. The enjoyment I get from stomping around the world (and the moon) as Mr. McD, as his faithful pilot Launchpad affectionately calls him, has not diminished. Thus when the announcement was made that a remake of this classic was forthcoming I was understandably excited.

It appears no expense was spared on the development of “DuckTales: Remastered.” The entire game has be rebuilt using polygonal backgrounds and hand drawn sprites. It’s a beautiful game and a clear sign that I’m not alone in my love of this franchise. The characters look exactly like their TV counterparts and are even voiced by the original cast (or at least the surviving members of the cast).
The game instantly cheers me up… until it makes me angry. Hearing those voices gleefully spout classic DuckTales style one liners brought me back to my childhood in a way the original could never do (but it nevertheless remains awesome).  Getting into the game itself revealed some classic and challenging gameplay, but unlike the original it started in Scrooge’s famous money bin as the sinister Beagle Boys were attempting a heist. Hammers and lasers and Beagle Boys were coming at me from all sides, but my quick reflexes and trusty cane (which doubles as a pogo stick) kept me alive.
DuckTales: Remastered makes little alterations to the original in terms of gameplay which results in a welcome visit to the unforgiving style of classic games as well as the frustration that comes with it. I died a lot. A lot. And I yelled. A lot. And by the end I wanted to throw the controller… and it’s been a long time since I threw a controller. Well not that long, but a while. Nevertheless, I never wanted to stop. That’s the beauty of a game like DuckTales: despite it’s difficulty and even being occasionally unfair I always came back for more. It became a point of pride for me. I had to finish. I’ve beat the original repeatedly and there was no way I was going to let this newfangled version get the better of me.
In truth the levels are actually slightly improved over the NES classic. The layouts have been tweaked just slightly for a better flow. Plus it’s easier to use Scrooge’s cane (one only has to press a button whereas the original required one to press down simultaneously – it always seemed awkward… but nevertheless awesome). 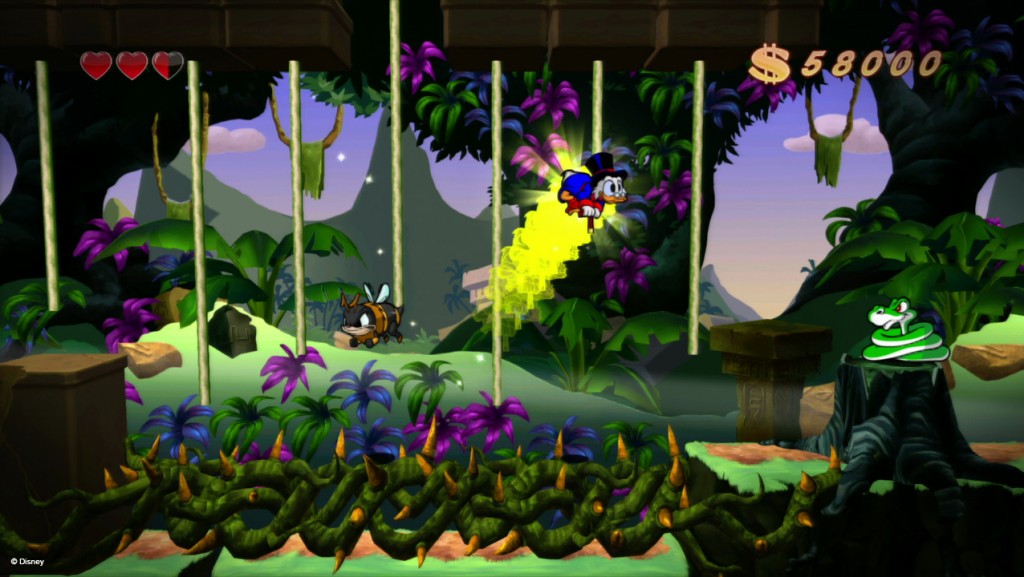 The game is loaded with chatty cut scenes that occur throughout each level. There are some who argue these serve as filler and bring the game to a grinding halt, but I feel they actually serve as the foundation of this retelling by helping to bring the story to life and are, the first time through, a delight. Given my frequent deaths however the cut scenes do get in the way of my desire to get back to the action, but mercifully they are easy to skip. Pressing start and A in rapid succession quickly became a habit following each death.
DuckTales is easily worth the 15 bucks it costs and should be experienced by anyone with fond memories of the game or cartoon as well as anyone seeking a very old school challenge. Sure, the final stage made me furious, but the completion of it was a near Zen moment. I’m absolutely thrilled that this game came to be and love the new visuals and the addition of the charming voice over work. I’m sure it won’t be long before nostalgia gets the better of me and I return for another play through of DuckTales: Remastered.