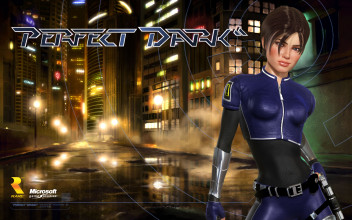 Perfect Dark follows the journey of Joanna Dark, a secret agent in the vein of Bond. Like Bond. she uses her intellect in conjunction with a plethora of weapons and gadgets to get the job done. In Perfect Dark her mission is to save the President… until it’s not.

I didn’t play Perfect Dark in the N64 era. Truth be told I didn’t play much GoldenEye either. This was before I became the FPS fan I am today (it was Halo that really got me hooked on the genre). So now that I’m an experienced and moderately competent player I felt it was time to give Perfect Dark a chance. It was always regarded with high praise from those that played it in it’s day fans and was seen as a worthy follow up to Rare’s legendary classic GoldenEye

My friend and I played through Perfect Dark in co-op via local split screen (an important and often overlooked feature in many games, but I can rant about that another time). From the moment we started one thing was immediately apparent: this game is hideous. And this is the HD version. Nevertheless it was tolerable and we played on. Fortunately it wasn’t long before I became accustomed to the dated visuals of Perfect Dark and eventually it just felt normal. After all there was a time when this was normal… even cutting edge.

The controls are pretty much the same story. At first they seemed maddeningly clunky, but the more I played the more I got a feel for them. One has to keep in mind they’re mapped off of the forward thinking, but oddly shaped N64 controller. However, I never quite mastered them. Aiming is a little finicky, as the reticle seems to have a mind of it’s own.

These controls and visuals are somewhat off-putting, but at the same time generate much of the charm this game possesses. That being said for me the real charm of the game is it’s over the top story. If you don’t want some slight spoilers stop reading now… and go back in time and don’t read this post’s title. The story has a generic enough beginning: Secret agent Joanna Dark is called in to do some secret agent stuff because the President is in trouble (he’s been cloned or something, I never really was sure what his problem was). This less than compelling story unfolds for the first few level until Joanna is suddenly called to area 51. “But what about the President?” she remarks as her mission unexpectedly rockets off into sci-fi territory. It should be noted that this moment was met when hysterical laughter as we played and was quoted repeatedly for the remainder of the game. From that point on the game feels like two stories folded together. The President’s story line continues to pop up, but it’s mixed with the alien invasion story line featuring what I assume is supposed to be an adorable little alien named Elvis.

Elvis wanders around in a few levels and occasionally shoots at something or activates a control panel. He also has a habit of getting shot (often by me… usually for fun) forcing a mission restart. The nice thing about having to restart a mission in Perfect Dark is that they are actually very short. When done correctly a mission usually won’t last more than five minutes. The problem is that we were nearly incapable of doing them correctly. Each mission features a set of objectives that Joanna must complete and while it’s easy enough to bring up list of them it’s not so easy to figure out what the hell they mean.

We spent an embarrassingly long time on most levels running around in total confusion trying to figure what we were supposed to shoot or scan or activate while having no idea where these objectives were located . I’d say half the time it was the obtuse nature of the goals and half the time it’s because we weren’t paying attention and instead focused and shooting each other in the back for laughs (always part of the fun of a good co-op FPS). I must admit I actually enjoyed being completely lost at times. This total lack of handholding is a rarity in most modern games and adds a level of realism and challenge that I find engrossing. And frustrating. But sometime being frustrated stems from the challenge and is part of the appeal.

Once we figured out what we supposed to do or what we were doing wrong we’d usually zip through the level and ridicule ourselves for our less than stellar secret agent abilities. The key was usually determining what gadgets we started the level with and then finding somewhere that we could use them. It seems obvious, but our run and gun instincts often got in the way.

I think it’s clear what the appeal of Perfect Dark was at the time. It played well for an FPS of it’s time and it has a robust multi-player mode which, like GoldenEye, is the reason most people played it. Our play through was devoted to the campaign, but if I can get enough enthusiastic people together a retro split screen firefight could be a blast. Perfect Dark isn’t remembered for it’s crazy campaign, and that’s probably for the best, but it’s undeniably entertaining and works beautifully for a co-op experience.