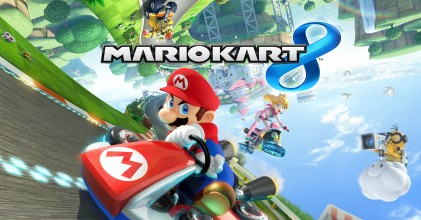 Dashing and Crashing in the Mushroom Kingdom – Mario Kart 8

Published by Ryan Cave In Wii U No Comments

I love my Wii U, I really do, but it’s true that new software comes out at a trickle. Fortunately, Mario Kart 8 has at long last hit the Wii U and, rather unsurprisingly, it was worth the wait. Mario Kart is a gorgeous showcase of what the Wii U can do. The visuals are glossy and vibrant and every track is rich with detail. It can be hard to take it all in while fighting for first place, but after a few times around a track one starts to really appreciate how much care has gone into this game. Along with the luscious visuals is an orchestral soundtrack of familiar, but beautiful and catchy music.

Mario Kart 8 features a robust assortment of characters, although many of them are baby versions of their more recognizable adult counter parts which seems a bit odd, but even if you’re not into the doppelganger babies there’s still plenty of choices. I usually hit the track with Rosalina of Mario Galaxy fame because it‘s nice to see her do something other than stand around. The game also features the usual crew of Mario and Luigi etc and also has all of the Koopalings. A pretty respectable line up.

Control is tight and simple. Any Mario Kart veteran will immediately feel at home. Mario Kart may be the only racing game to still use the A button as gas (although given Wii U lacks analogue triggers it doesn’t really matter what button is go). Apart from gas there’s just jump/slide and weapon buttons as well as the brake, but who uses the brake?

Back when I played Mario Kart on the Wii I found it to be a blast at first, but I quickly grew tired of being punished for my skills and losing a race because the game brutally attacks any player that’s doing well. This is somewhat true of all Mario Kart games and when done correctly it’s part of the charm. Having played through every cup and all three cc classes in this latest instalment I was pleased that I never felt like smashing my giant controller. Actually that’s not true. If I didn’t occasionally feel like I’d had my victory unfairly stolen it wouldn’t be Mario Kart. However, theses moments were the result of a series of unfortunate events and overall I felt my skills as a driver would consistently carry me to victory. Yes drivers at the back of the pack get the stronger weapons like lightening and the infamous blue shell, but with enough of a lead their attacks will only cause one to lose first place temporarily and not lose the race entirely. Sure, there was that time I was on the fourth and final race with three first place wins under my belt when in the last five seconds two opponents soared past me pushing me to third and destroying my three star run, but that doesn’t happen too often.

There’s a solid number of tracks. 32 to be exact. Half of these tracks are new and half are remakes of courses from previous instalments. This may seem like a cop-out, but the new tracks are a blast and make great use of the games new mechanics, while the old tracks bring a welcome feeling of nostalgia and have been altered to take advantage of the changes present in Mario Kart 8 making them feel fresh and new.

Not all the karting is done on land. Tracks in Mario Kart 8 have a portion on land, underwater and even upside down. This isn’t the first time we’ve been able to drive underwater, but it is the first time we’ve been able to defy gravity. Tracks often go along walls or turn upside down and when they do the kart’s wheels turn sideways like the flying Delorean in Back to the Future and are able to hover along wherever the track leads. It looks wicked and makes for some cool track designs, but all too often it’s hard to notice which way is up. For example there’s a track with a section that involves driving up a waterfall, but it tends to feel more like driving up river rather than just up.  There are levels where this new trick is more impressive, usually when other parts of the track are visible, such as when it splits in two and other drivers are cruising along above (or perhaps below) the section the player is on.

As always Mario Kart features great multiplayer action. It supports up to four players locally and has made for some great Friday nights. Mario Kart is easy to understand and that tendency to punish superior players that can be so frustrating in single player can be very amusing in multiplayer. There’s also a nice online mode, but I prefer to play against friends and none of my friends have a Wii U (yet).  The other drawback of multiplayer, that will only affect people who actually know others with a Wii U, is that the game only allows voice chat in lobbies and not during races. This is bizarre to me as I like to brag and spaz in real time, not just after the race has finished.

Mario Kart 8 has a ton to offer, but it does lack a Mario Kart staple that I’m surprised more people don’t seem too upset about (although they might be, I haven’t really looked into it). For me Mario Kart has always primarily been about multiplayer and a big part of multiplayer was battle mode. Battle mode was the place where victories were meant to be stolen. There’s no race, just your kart, three balloons and a barrage of crazy weapons.  You lose a balloon every time you’re hit and when you lose all three you’re out of the game. While this installment does have a battle mode it doesn’t have any battle levels and instead uses the standard courses. After a couple rounds it was quickly apparent that this was no substitute for a level crafted specifically for this very different style of gameplay. Battle requires an open field so that opponents can come from any direction (often even above depending on the stage). When the only option is a race track everyone tends to just drive around in circles firing their weapon every time someone drives by and it’s boring. I expect Nintendo to release DLC with proper stages, but it frustrates me that charging extra for a real battle mode may have long been a part of the plan and it frustrates me more that I will undoubtedly pay for it. However, it does not frustrate me that I will probably love it.

Regardless of my quibbles with it, Mario Kart 8 is fantastic. Beautiful scenery and tight gameplay kept me coming back and there’s little doubt I’ll continue to come back for months, even years to come. I’ve got to get my star ratings up and I fully expect it to be a go to game for multiplayer for some time. I sincerely hope they release to some traditional battle arenas despite the fact that it means I’ll be forced to part with more money. This is easily one of the best entries in the franchise and easily a must own for anyone with a Wii U… and a few extra controllers.