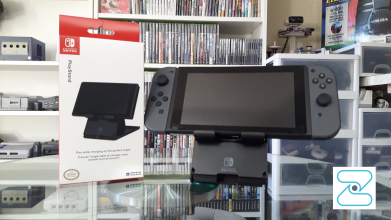 Published by Ryan Cave In Nintendo Switch No Comments

At first glace it seemed unnecessary, but for some reason it appealed to me. I shrugged it off as typical new console excitement and resisted getting one. However, after a few months with the Switch the appeal of this little stand never faded. Recently, I was going on a trip with a friend I decided to finally pick one up. I justified it by thinking about how it’s a low-cost investment and at the very least makes it possible to charge the Switch while in portable mode. Plus, it looks cool.

Once I got the Hori Playstand set-up I was pleasantly surprised by the difference the stand makes. The slight elevation and adjustment to the viewing angle makes using the Switch in table top mode noticeably more comfortable. While the Switch works perfectly well using only the built-in stand, the addition of the Hori Playstand makes me less conscious of the system itself. That is, I’m less distracted that I’m playing games on a table using a relatively small screen. When two of use were playing the improved angle undoubtedly made for a better experience.

In addition to the improved view the Playstand also offers a considerably more stable way to use the Switch in tabletop mode. The Switch’s built-in stand gets the job done, but it’s tiny and off center. There’s no doubt it would take a good shake to knock it over, but it’s undeniably on the flimsy side. The Playstand offers a wide base and at the very least makes me feel more confident in my precious console’s stability.

The final, and perhaps biggest, selling point of the Playstand is that by exposing the underside of the Switch it makes it possible plug in a charging cable while its’s on a table. For those that use the unit for prolonged periods on the go this is a welcome improvement. Knowing that a game will not be interrupted do to lack of a charge is a certainly a plus.

The Hori Playstand is far from an essential purchase, but it is a worthwhile one. It’s very low cost and has a sturdy construction. It makes using the Switch on the go an even more enjoyable experience. Given its improvements to the viewing angle, stability and the added ability to charge in tabletop mode I have no regrets in picking up this accessory.