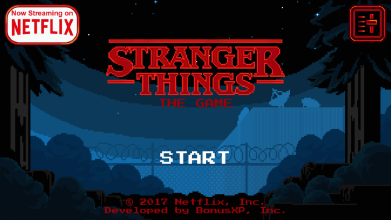 Published by Ryan Cave In Android, iOS No Comments

Stranger Things is a free game, so other than the time one needs invest there’s no reason not to try it. It was this logic and my fondness for the show that led me to download Stranger Things: The Game. I was immediately impressed with the presentation of the game. While it pretends to be in the style of an 80s classic it’s actually more akin to a 90s game. It’s bright, joyful sprites give the game a distinctly different vibe from the show. Stranger Things plays out more like an homage to the source material rather than a spin off or retelling. The game does little to explain what’s going on as the developers seem to have put the quality of the gameplay ahead of the story under the assumption that anyone playing will be familiar the show.

The level of quality and amount of content present in Stranger Things: The Game was an unexpected and welcome surprise. It captures the essence of the show while converting it into a charming and entertaining game. The characters and their world are presented in a cartoonish style which allows them to engage in the adventure with little fear and a ton of excitement. The game begins with Hopper on the case, but new characters with various abilities are promptly and frequently unlocked. Each new character is based upon their counterpart from the show and has an ability that inspired by their personality.

The character’s abilities are primarily various forms of attack, but they are also used in puzzle solving. The game has several sections with light puzzles that are generally quickly solved, but engaging nonetheless. Getting through a dungeon can’t be done with brute force alone and sometimes one must redirect lasers, find secret passages and distract guards to move on. The ultimate goal of each dungeon (all of which are inspired by locations seen in the show) is to find an Eggo waffle. This is both logical as well as funny and a perfect example of how the game is meant to be played by fans of the show.

I was tremendously impressed with the quality of the game, particularly the control scheme. The game uses what is essentially a point and click interface. Just tap where you want to go and the character rushes over. Want to attack an enemy, just tap him. Want to switch characters? Just tap the icon. The control is impressively intuitive and usually works extremely well. Occasionally, I was overwhelmed in rooms with a number of enemies and took a hit the moment I entered, but I was always able to find a way through, often by using the various skills of the characters (the flashlight will stun enemies and is a welcome way to keep them at bay).

The town of Hawkins is filled with familiar faces and most of them have lost one or two cherished items. It’s up to you to find these collectables which can be exchanged for heart containers to expand your health. There’s a number of other items hidden around the town which level up characters and unlock other surprises so there’s plenty to do beyond the main objective.

Stranger Things: The Game is the perfect way to promote the new season. It’s fun, robust and unique. While the story may seem like gibberish to those unfamiliar with the show, it will be a delightful near parody to it’s target audience. Given it’s 100% free (no dlc of any kind) there’s nothing to stop anyone with even a passing interest from trying it. While I was playing it my friends and I would compare notes and discuss our discoveries and repeatedly express our surprise at how much we were enjoying the game. I thoroughly enjoyed my time with Stranger Things: The Game and encourage any fan of the show to give it a shot. This is tie in promotion at its finest.