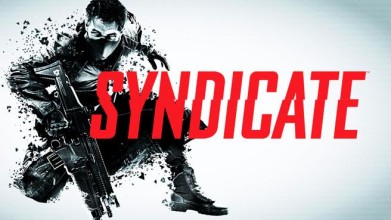 Published by Ryan Cave In Overlooked No Comments

This week I played EA’s Syndicate which, like so many games in the current gen’s life cycle, can easily be found on clearance.
Syndicate is not epic or particularly memorable, but it’s fun, addictive and has a couple of unique elements that make it stand out.  In the world of Syndicate much of the population has had chips implanted in their brains which allows them to have an ever present heads up display without having to use smartphones or wear cumbersome hardware such as Google Glass. You’re an elite operative who works for one the major corporations or “Syndicates” which, in the near future world of the game, have replaced governments for control of the population. Like the governments and countries they’ve cannibalized these enormous, heartless conglomerates are constantly vying for power and control. Syndicate puts you at the center of what appears to be the beginning of a major power struggle between Eurocorp, the Syndicate you work for, and the other Syndicates.
As an agent of EuroCorp your neural implant allows you to “breach” (or in 90’s vernacular “hack”) various pieces of tech throughout the game. Breaching is done simply by looking at an appropriate piece of hardware and holding the correct button for about a second (I played through on Xbox 360 so in my case the left bumper made the magic happen). This process is very straight forward, but in most situations is surprisingly satisfying. As you progress you gain abilities or “apps” enabling you to breach enemies and mess with their heads in three cool albeit unsettling ways. First up is suicide which causes your opponent’s head to burst , naturally killing them and damaging others nearby. Next up is the “backfire” app which, as the name implies, causes weapons to backfire injuring its user and making him loose his balance. It’s a great way to knock an enemy out from behind cover and weaken him for the forthcoming barrage of bullets coming his way. The third app is “persuade” which causes its victim to switch sides and fight on your behalf before it wears off and, presumably overcome with remorse, the poor fool takes his own life.
On top of your apps you’ll have use of the “Dart overlay” which allows you to see enemies hidden behind cover as well allowing you to move faster (in the classic Matrix style slow motion), take less damage and deal more. Dart overlay alters your perception so the world appears black and white while enemies and important objects get an orange glow. While it only lasts a short time it recharges quickly (as does your health). The combination of the Dart overlay and the apps makes for some interesting strategic options. It’s a blast to trigger Dart then stun three guys with backfire before taking them down, then making someone in the next wave lose their head and take out their buddies. I also liked to start a firefight by using persuade to create a diversion before I ran into battle.
As far as audio is concerned the music doesn’t stand out, but works perfectly to help generate excitement before and during fights. It’s a variety of techno beats including one particular dub step track that never failed to get me riled up before an intense battle. The sounds of the surrounding world are rich with NPCs muttering as you walk by, TVs and radios spewing relevant news and propaganda and enemies shouting appropriate banter as they try to destroy you.  The game features the voices (and likenesses) of Brian Cox and Rosario Dawson.  Cox delivers his usual and always engaging villain character, while the often endearing Dawson gives a distractingly wooden and detached performance. However, I will say that even in her digital form I had a hard time taking my eyes off her.
Syndicate was exactly the game I was craving when I started it up. A linear run-and-gun style game set in a cool sci-fi universe. While technically it’s not a new IP it’s one I was previously unfamiliar with so it felt fresh. Story wise it’s not the most compelling tale and proves to be fairly predictable, nevertheless I enjoyed the ride. It’s not a long game which helps make it the kind of game that’s perfect to plow through over a weekend.  While there’s nothing revolutionary in the mechanics and the environments are redundant Syndicate keeps up a fast pace and had enough diversity in the gameplay to keep me interested from start to finish.  I would have enjoyed seeing more Syndicate’s vision of the world in 2069 as most of the game takes place in very similar buildings or in closed off alleys populated with mentally unwell hobos.  The shiny cities supposedly filled with happy people enjoying life via augmented reality are only seen from a distance usually through windows or over balconies. That being said Syndicate is a polished FPS with a few cool elements that make it worth checking out if you’re in the mood for a traditional run-and-gun shooter.